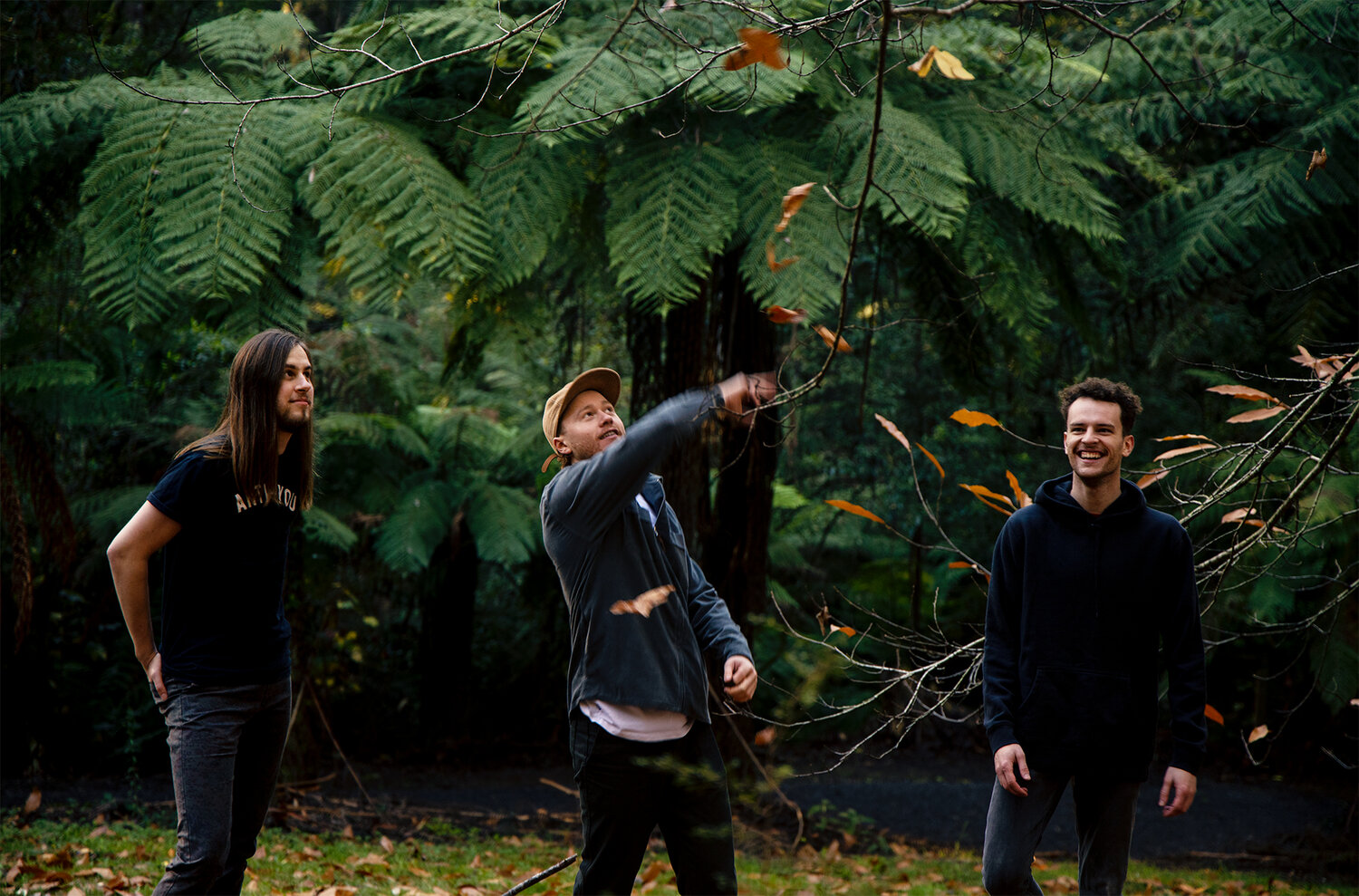 The current COVID-19 circumstances have generated a mental health crisis. More people are reporting significant symptoms of anxiety or clinical depression, which makes it now more important than ever to open up and provide support to others about how we’re feeling. Melbourne three-piece Peak Park purvey this message in their latest single ‘Please Don’t Be So Hard on Yourself’. Band members Thomas Hoeft, Mitch Summers and Callum Lausberg offered their time to T-Rex Musiq to discuss the new release.

Peak Park formed in 2018 as guitarist Hoeft brought together all the band members to play a one-off performance of a number of songs he had written himself. The trio quickly built a strong chemistry and found ta potential for something bigger. Since, the three have produced five singles together and performed at a number of venues across Melbourne.

To limit their sound to a singular genre would be a crime. There is an atmospheric, honest and thought-provoking message that touches on alternative, art-rock, indie, and psychedelic rock. Hoeft explains, “There’s that many things going on, it’s hard to make it feel like it sounds like something or pulls from a specific reference.”

Vocalist and guitarist Mitch described this being due to their widespread influence pool. The three individuals have quite different music tastes, Mitch and the band find it interesting to see where they overlap.

“It’s cool to see how that blends and comes from a few different places.”

The current pandemic restrictions have delivered a severe blow to many artists, not being able to play in front of a crowd. For Peak Park, this has not necessarily raised any issues with the band having a primary focus on making music before gigging.

“It was never really a big thing for us to play a heap of gigs,” Hoeft says. The guitarist previously played in a high school band for a significant stint and shared how, “You’d be playing in a venue for a while and it was just the other bands…or the dude behind the bar. So, I think when this project started, there was a bit of a conscious effort to not play shows for the sake of it.”

Bassist and vocalist Callum supported this decision to prioritise recording a bank of songs before performing.

“In the beginning, it’s always good when you go and catch a band live that you really like,” Callum added. “It’s great if you can then when you look them up on whatever your preferred streaming sites are and they’ve got some stuff to listen to.”

One of these songs being their latest jam ‘Please Don’t Be So Hard on Yourself’. Mitch describes this song being about those that are facing struggling battles internally with themselves and are finding it difficult to express them onto others. The title of the track speaks for itself, particularly in times like these, understanding the thought process of experiencing these things.

Mitch shared it was a slow progress getting this out. “It’s weird to think about it retrospectively,” Hoeft added. “For a while you just make noise…and then 8 months later you have a song.”

The first traces of the song ignited back in August last year when Mitch became super hyped on a particular set of chords and a picking pattern. Tom returned with a specific marimba loop, which laid the foundations to become the driver for the song the whole time. Weekly hangouts rapidly became too infrequent, so the three would meet more often to put this single together.

Mitch shared that the lyrics stemmed from the chorus and draw from personal experiences. For each listener they feel direct and personalised as we battle the voices inside ourselves.

In this section there is a constant rise illustrating the pile up of thoughts and emotions that can carry inside the mind, wondering if opening up will tarnish the way they are viewed by others. The instrumental that follows is an eruption of raw emotion, letting it all out in a Gang of Youths-esque style. For many, this expression remains bottled up, causing damage internally.

In this constantly changing time, artists are strained into limbo of deciding whether they should release their music or not. Peak Park decided to go through with the release, as Mitch explains, due to its relevance.

“In terms of COVID, it was never intended that way, but the message resonated well with mental health currently.”

Not being able to go with the initial plan, the three-piece have made special plans to keep the hype going.

“This time round we’ve made a real conscious effort to try and plan ahead and do some things,” Hoeft says. The three are considering releasing snippets of the recording process with the demos, along with videos discussing the breakdown of their songs and alternate versions and remixes.

The trio have thoroughly enjoyed seeing their community expand the more they promote their music.

“In a sense it has been very validating trying to push it onto people and seeing them engage in it as well,” Hoeft says. “It feels as though all that effort is transpiring, which is cool. If it hits someone, I’m happy.”

You can find ‘Please Don’t Be So Hard on Yourself’ on all streaming platforms and the most up to date Peak Park news on their socials under the handle @thisispeakpark.